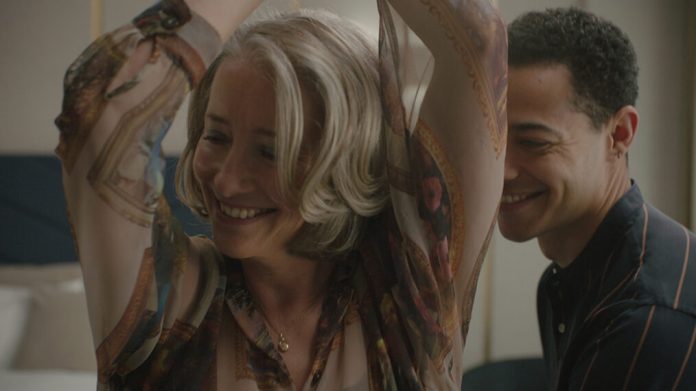 Good Luck to You, Leo Grande is a chamber film where the story occurs in one place (well, all in a hotel room except for one scene in a hotel restaurant), and a two-hander script with only two characters (well, except for all the waitresses at the hotel). So, I guess it’s neither, but pretty damn close. The Hulu film takes place in one location over four different meetings. One is Nancy Stokes (Emma Thompson), a widow and retired educator. She has hired a s3x worker named Leo Grande (Daryl McCormack). Nancy is as nervous as can be, and Leo senses it. She keeps nervously trying to offer him to leave because she is self-conscious over being twice the age, Leo.

After she changes into a nightgown she bought, she sees Leo had a candy bar and tequila out of the minibar. She assumes he is trying to work up the nerve to sleep with her. She lays in bed and tells him he can leave and even take half. He is a gentleman and sits down next to her, and they talk. He wonders why she decided to purchase s3x because she must have had some suitors. Nancy says, of course, but they are old, and she wants a young man. Nancy also admits that her late husband barely wrinkled the sheets in the s3x department. She also drops this bombshell – Nancy has never had an orgasm. The more that Nancy reveals, the more comfortable she is getting. Leo senses this, kisses her, and we can presume they have had s3x.

READ MORE:  Where does John Lurie live? Where is Paintings with John Filmed?

The subsequent meetings happen in the same hotel room, and Nancy has now brought a list. It includes practicing oral s3x on each other. Leo notices that she left having an orgasm off the list. But Nancy is not a rule-breaker and making this list is as wild as she gets. She doesn’t want to add that little line to her sheet. She wants to cross off each one on her list. The argument about adding that to the list ensues until finally, she gets what she wants, and he allows her, we assume, to perform fellatio. Their next session takes a wrong turn as Nancy reveals that she found out his true identity. Leo immediately decides to end their business relationship. Nancy is perplexed because she has been awakened and thought they could be friends.

Leo wants this emotional wall and uses physical intimacy to fill this hole. (Truly, no pun intended). Leo finally reveals a part of his backstory – his mother disowned him, and he has not talked to her in years. Their meeting ends poorly, but Nancy sets up another session in the hotel room restaurant. They pretend for the waitress, who is a former student of Nancy, is buying a car for him. The waitress tells him how Nancy called them sluts in school, and Nancy apologizes for that. She then lets her guard down and tells her that Leo is not there for a car, but she purchased him for s3x. They go for one more meeting, where Leo helps Nancy achieve her first orgasm.

READ MORE:  Is the courtship scripted? Is the NBC show fake or real?

What happens here is not only a s3xual awakening for Nancy. She has been feeling physical repression for decades. However, this is a thawing of her emotional coldness as she never expressed her needs to her husband. She has always kept others, including her students, coldly at arm’s length by calling them out on their s3xual dalliances at young ages. Leo’s secret about his mother disowning him and her brother never bringing up that he knew he had to be doing something other than working on an oil rig is about keeping emotional walls up. Perhaps he’s used s3x to connect with people since he could not do this on his own for fear of being hurt.

Either way, both have experienced a s3xual and emotional awakening.