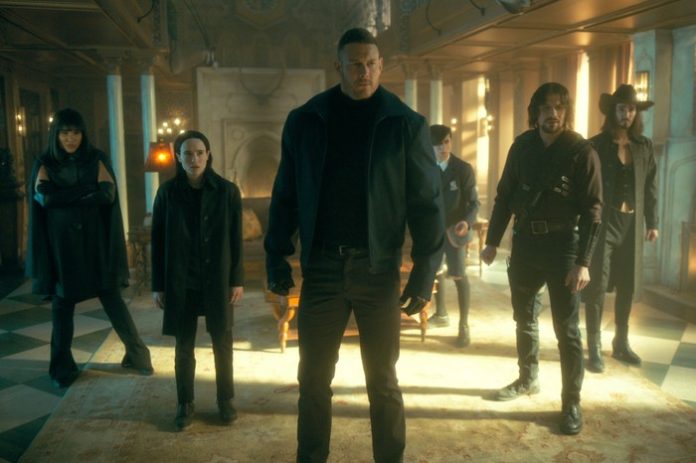 The Umbrella Academy season 3 ending is explained. The Netflix series — which is based on the comic by Gerard Way and Gabriel Bá — returned for season 3 with some twists and turns in the story. Of course, it wouldn’t be a season of The Umbrella Academy without a world-ending catastrophe, but along with that came some new and intriguing challenges for the titular characters to contend with.

The Umbrella Academy season 3 ended with the world almost ending, Klaus and Luther killed by their father Sir Reginald Hargreeves, and Allison reneging on her deal with Reginald to save her siblings and reset the universe, which had been wiped out by the Kugelblitz, a black hole that destroyed everything saves for Hotel Oblivion. After Allison kills Reginald and completes the world’s reset, the Umbrella Academy is restored without their powers, Sloane has disappeared, Allison’s daughter Claire (and husband Ray) is back, and Reginald is alive alongside the mysterious Abigail Hargreeves.

Suffice it to say that The Umbrella Academy season 3 ended on a cliffhanger that shook up the status quo, but introduced a host of new questions yet to be answered. Here is the ending explained, including whether the Sparrow Academy survived the world being reset, how Ray and Claire are back, and how season 3 sets up season 4.

Why The Older Five Warned Himself Against Saving The World

One of the biggest surprises from The Umbrella Academy season 3 was learning Five founded the Commission. After spending years attempting to leave the Commission, which was in the control of the Handler, to warn his siblings about the apocalypse, Five is shocked to learn that not only does he create the bureaucratic organization, but his older self warns him to let the world end instead of trying to save it as he usually does. Naturally, the elder Five doesn’t elaborate as to why he shouldn’t save the world, but it’s possible he knew that resetting the world wasn’t going to fix anything. Rather, it would create more problems than the younger Five and the other Umbrella Academy would have to keep fixing. It could be that the older Five had already lived through this reset and wanted to dissuade his younger self from saving the world because he knew the preposterous outcome. With Reginald being untrustworthy, Five likely didn’t want to risk him taking control over a new timeline for his own gain. It’s also possible the elder Five knew he and his siblings would no longer have their power after the world reset, which would make it harder to save the world yet again.

How Ray, Claire, & Abigail Are Back At The End Of Season 3

This is one of the biggest questions of The Umbrella Academy season 3. Allison struggled a lot with Claire being gone and leaving Ray behind. In the season 3 finale, however, they are both back and seemingly living in Allison’s old home in Los Angeles. Ray and Claire could be back because Allison wished them into existence. Having been the last one to use Reginald’s machine in Hotel Oblivion (formerly Hotel Obsidian), Allison’s hope to see Ray and Claire again may have filtered into the machine, affecting their fates when the world reset and giving them back to her. It’s also possible Allison died and went to heaven, which could explain why both Ray and Claire are there at once despite them being from different decades.

READ MORE:  Where are Jessica Servais and Jordan Kendhammer today?

The Umbrella Academy season 3 established life after death thanks to Reginald experimenting with Klaus’ powers. Knowing such a place exists could mean Allison died using the machine and got heaven where two of the people she loves most existed at once. Season 4 will likely answer the question, but Allison being dead would explain why she isn’t with the rest of her siblings at the end of season 3. With regards to Abigail — whose body was being kept hidden on the moon — being alive, it’s likely Reginald planned for this to happen all along. He knew how to work the machine in Hotel Oblivion and that the Umbrella Academy was needed to power it. Perhaps Reginald manipulated the machine to ensure Abigail returned upon the world resetting so that, even if he couldn’t complete his task, everything was already in order for her resurrection.

Where Are The Sparrow Academy (Did They Survive The Reset?)

All of the Sparrow Academy’s members, save for Sloane and Ben, were sucked into the Kugelblitz before it swallowed up the rest of the world. Upon reset, however, none of the Sparrows were with the Umbrella Academy (except for Ben, who was an original member). This begs the question regarding their survival. They likely did survive the world being reset because they existed before the alternate timeline, having been born on the same day as the Umbrella Academy. To that end, it’s possible they are residing wherever they lived prior to the timeline being changed. Sloane may be off exploring, which makes sense because she was reading a book called Jetset Life during The Umbrella Academy season 3.

What’s more, the Sparrows could return in season 4 to help the Umbrella Academy make things right. Perhaps they could team up against Reginald, who has wronged all of them in many ways. But it’s possible they won’t necessarily remember who the Umbrella Academy is. A universe that has been reset means they could have led entirely different lives and might not recognize anyone from their previous lives — that includes Sloane, who may not know who Luther is despite having married him. Either way, it’s likely the Sparrows have also been stripped of their powers in the new timeline.

READ MORE:  Is Shenmue the animation on Netflix, Hulu, Prime, Crunchyroll or Funimation?

What Is The Jennifer Incident & How Did It, Kill Ben?

How Ben died in the original Umbrella Academy timeline remains an enigma, but there are more clues regarding how he was killed in season 3. Season 2 confirmed Ben was killed on a mission and The Umbrella Academy season 3 expands upon that by adding another dimension — the “Jennifer Incident” is mentioned several times and Ben, despite being alive in the new timeline, has dreams about it that lead him to draw the mysterious Jennifer. It’s possible Jennifer is someone who required saving by the Umbrella Academy, but they were not able to pull it off and Ben felt guilty and terrible about it afterward. There are The Umbrella Academy theories suggesting Ben died by suicide, which could align with the Jennifer incident if it went awry.

Conversely, Ben may have died by accident because Reginald pushed him to do the mission that he may not have wanted to do or was fully prepared for. In season 1, Ben was noted as someone who always wanted to please Reginald and Luther, so perhaps Ben went in to either save Jennifer or stop her if she was perceived as a threat. In over his head, Ben could have been killed because he went in on his own without backup in a bid to prove himself capable in the eyes of his father. Either way, the circumstances of Ben’s death remain a mystery — in the show and in the comics — but the answer could finally be revealed in The Umbrella Academy season 4.

Why The Umbrella Academy Lost Their Powers?

Reginald Hargreeves was nothing if not a devious planner. He adopted the Umbrella Academy and the Sparrow Academy precisely because they had the powers needed to save the world. Crucially, he adopted them to reset the world and bring back Abigail Hargreeves. Considering he knew how to operate the machine inside Hotel Oblivion, it’s possible he made it so none of his children would retain their powers in the new world. If Reginald was the one to bestow them with powers somehow (perhaps indirectly), he could have made it so they no longer had them.

If that’s the case, it would mean the Umbrella Academy and the Sparrows would not be able to come after him or harm him with their abilities, nor would they be able to save or change the timeline. The Umbrella Academy without their powers is a first for the Netflix series and makes their lives a lot more complicated moving forward. It also makes them a lot more vulnerable. It’s also possible the Umbrella Academy lost its powers because they were sapped to power the machine, which was meant to kill them. When Allison saved them at the last minute, it might have prevented them from dying but their powers could have been drained permanently.

Is Lila Still Pregnant After The World Was Reset?

Lila revealed to Diego that she was pregnant in season 3, explaining she used Stanley to see if Diego would shun their potential child together or embrace him. Now that the world was reset, it could mean Lila is no longer pregnant. After all, things have likely changed after the world reset, as have the circumstances surrounding her history with Diego. However, considering Lila was in Hotel Oblivion when the world was being put back together, it could be that she was unaffected by the reset and was still pregnant. Hotel Oblivion did exist in a dimension all its own, largely away from the effects of the Kugelblitz, so it probably didn’t impact Lila’s pregnancy at all.

The Umbrella Academy’s season 3 finale not only leaves the titular characters without powers and in an entirely reset universe where anything is possible, but the post-credits scene reveals there is another version of Ben in this new timeline. Season 4 could see the titular characters facing the paradox of psychosis that results from being in too close a proximity to other versions of themselves. Without their powers, the Umbrella Academy may finally have a shot at living normal lives for a while without having to worry about preserving the timeline or stopping another world-ending event. However, Abigail’s return and Reginald’s betrayal will lead the siblings to eventually confront their father.

Allison having Ray and Claire back at once will cause her to question her new reality — be it in death or wishful circumstances. Luther will go in search of Sloane, but will more than likely reunite with his siblings after a while to stop whatever catastrophe rears its head. There could be another apocalypse, but there may no longer be a Commission because Five doesn’t have time travel powers in this new universe. What’s more, season 3 included several revelations — including Five’s founding of the Commission and the older version’s advice to let the world be destroyed, the Hargreeves learning Reginald is an alien, the mystery of Abigail, etc. — that will surely have a follow-up in season 4. There will surely be a lot of time to make amends as well. And in a world where the Umbrella Academy has no unique abilities and their relationship with each other is somewhat tense, season 4 could prove to be the show’s most interesting yet. Whatever the case, The Umbrella Academy season 3 shook things up a bit while providing a new path for the titular characters to take.